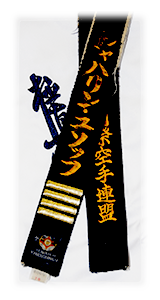 Kuro Obi dojo is a full time kyokushin karate dojo that opened its doors in March 2011. It is the successor to Shihan Shah's part-time Newtown Kyokushin Karate club that had been in operation for over 15 years. In late 2009, he decided that it was time to take his karate teaching to a new level, retired from his day job as IT admin at the University of New South Wales, and started looking around for a full time dojo location. Eventually, one was found in Petersham, not far from Newtown, and Kuro Obi Martial Arts came to be.

Kuro Obi means "Black Belt". Nothing more, nothing less. As a dojo name, it professes no high-flying ideals or lofty philosophies. The owner of a Kyokushin black belt knows what it means.

In Kyokushin karate, attaining a black belt can be one of the significant high points in the list of personal achievements. Along the way to achieving it, with the hard training and determination required, you should acquire and develop all those ideals that one ascribes to the martial arts. The skills, philosophies, and determination that you acquire can then be applied to other aspects of your life too.

A Kyokushin black belt stands on its own and is generally respected worldwide.

Kuro Obi dojo is part of the International Federation of Karate Australia Inc. (IFK Australia), a NSW registered not-for-profit association formed for the benefit of all its students. IFK Australia in turn is the Australian branch of the International Federation of Karate, with 10th Dan Hanshi Steve Arneil as the President, and based in the UK, and with affiliations in over 50 countries worldwide. Click on the logos on this page to go to the respective pages for these organisations.